BERILDA was a flagship refit for Front Street Shipyard in 2016. More than just a successful project, BERILDA is the stunning result of exceptional teamwork among her owners, her crew and the entire team at Front Street Shipyard. We’re proud of the finished yacht, and we’re grateful to all involved.

For almost four decades the 122-foot steel-hulled BERILDA has enjoyed a distinguished pedigree in addition to her timeless design by Feadship. Originally launched as CLAYBETH in 1978, BERILDA has been known as SHARON S, HIGHLANDER IV, VIRGINIAN, LADY ALLISON and, most recently, SIRENUSE.

In fall of 2015 she was lucky enough to come under the ownership of a family committed to restoring the esteemed yacht to her original glory — and better. They reimagined BERILDA with a new general arrangement, a modern interior design and fully updated systems for long-range cruising along the East Coast and the Caribbean.

The owners enthusiastically became part of the refit crew at Front Street Shipyard, frequently spending long stretches of time in Belfast with the boat. They led all interior design decisions without the need for a stylist, which resulted in modern, warm spaces with inviting tones and creative touches. They were also on-hand for the frequent engineering and systems decisions that are necessary during a refit, helping us to streamline the process.

Those decisions were critical for BERILDA. As our technicians at Front Street Shipyard began digging deeply into the project early on, they discovered many previously unknown issues that could have affected the integrity of the yacht. Hidden corrosion in her metal bottom resulted in the extensive replacement of metal plating. Her systems were aging as well, so we installed a new 100kw generator, air-conditioning compressors and air handlers, a watermaker, sewage system and engine mounts. Consistently the owners chose never to cut corners on the vintage vessel, ensuring she would be of  the highest quality when she returned to the water. 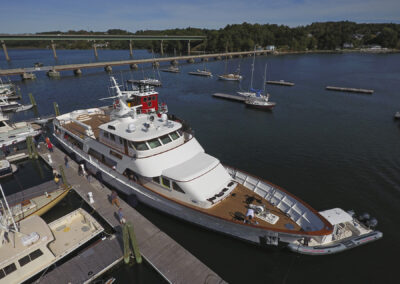 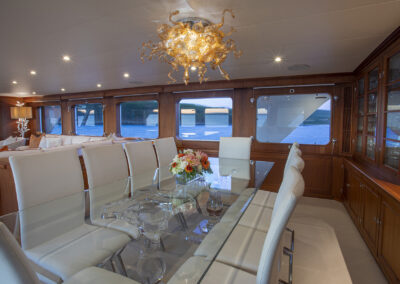 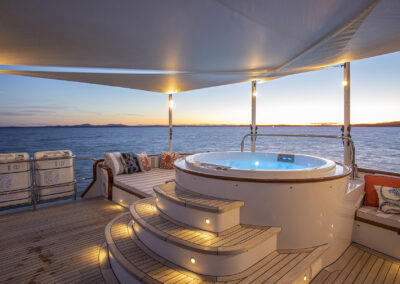 The heart of the refit is the interior transformation. The owners asked us to convert the dining room forward on the main deck to the owner’s stateroom. The finished room is open and airy with a modernized interior including new carpeting, custom cabinetry and new furniture. A pantry on the main deck is the master bathroom. The former owner’s cabin, located aft, was converted into two cabins with a queen bed and head in each. These guest accommodations are fully updated and tastefully appointed.

On the main deck we built a new pantry and service area. We replaced all of the overheads on the main deck level. The salon has new carpet throughout, and the day head got a face lift with new tile and accessories.In fact, six of the ten total heads got new tile.

On the upper deck, we redesigned several of BERILDA’s areas for lounging and for entertaining. We built a new custom hot tub where the owners and their guests can relax. Nearby is a new barbeque and bar.

BERILDA was relaunched on September 28, 2016, almost exactly one year after she was hauled at Front Street Shipyard to begin the refit. All the shipyard’s employees who took part in BERILDA’s refit turned out for the christening, as well as the crew, owners and their family.

Addressing the Front Street Shipyard team during the launch, BERILDA’s owner remarked, “If you remember what she looked like when she came to the yard, and then you have a look at her today, it’s something that every one of you should be incredibly proud of. And we couldn’t be happier.”

BERILDA made her way south for the winter exploring the Bahamas and parts of the Caribbean. She has a capable crew of six who care for the yacht and her guests. We wish BERILDA, her pleased owners and her crew the best of luck with this like-new yacht.